Why We Started Liquid Farm

We were eating local, supporting mom and pop restaurants and farmers markets. In trying to support California wines, we typically didn't finish those bottles as eagerly as the old world wines on our table. That's when we decided to make wine from our own backyard in a style we craved. 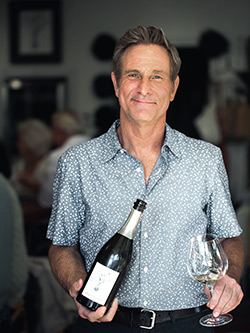 Jeff has been in the wine business for the past 20+ years, working for some of the top Champagne and Burgundy houses. With the name Liquid Farm on Jeff’s mind for many years, it was the catalyst for starting the project in 2009 with the helping guidance of Brandon Sparks-Gillis of Dragonette Cellars. 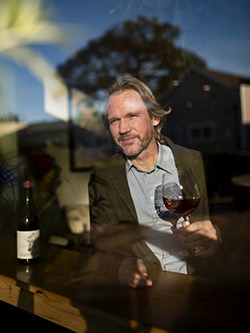 James, a native of Idaho, initially worked with Liquid Farm wines via Dragonette Cellars, where his winemaking career started in 2009. Prior to that he grew up surrounded by a family of bakers. Since baking and wine making involve many similar processes, James has been perfecting his talent for precision, organization and creating exceptional taste and quality for many years.

Timeline of our Wines

We started in 2009 with only 4 barrels of Chardonnay, all from the same vineyard in the Sta. Rita Hills. The original idea was to make one wine. However, the wine itself had a different plan and we gladly listened.

Two of the four barrels made up our first White Hill Chardonnay. With a more mineral driven profile, those barrels reminded us of drinking Premier Cru Chablis and were given their name in honor of the chalky white hills of Chablis and diatomaceous earth of Sta. Rita Hills.

The other two barrels of Chardonnay had a profile of warmer tones and were texturally more voluptuous, reminding us of Meursault and the other sexy wines from the Côte d' Or (Slope of Gold) we are admittingly addicted to. Hence, our other bottling: Golden Slope.

Since then, we’ve had the opportunity to expand our lineup by accessing chardonnay grapes from other vineyards in the Sta. Rita Hills and the neighboring sister AVA of Santa Maria, and produce wines like La Hermana and our flagship, Four.

In 2011 we had the opportunity to make a little Bandol-inspired Rosé of Mourvedre sourced from Happy Canyon AVA. Since we drink white and rosé like water all year-round, it seemed like a pretty good idea!

We produced our first Sta. Rita Hills Pinot Noir in 2014 and we released a total of four different Pinot Noirs in the past year. We typically focus on three single-vineyard Pinots and one blend from vineyards across Santa Barbara County (our "SBC").

In 2021, we proudly released our first blanc de blancs Champagne, imported from the famous Côte des Blancs Grand Cru. This was the result of an amazing collaboration with Pertois-Moriset (a family-owned Champagne House with over 70 years of history), and released under the Liquid Farm label.

We seek to support local Santa Ynez Valley viticulture and honor our palates' love for old world wines that have naturally high acidity and are not masked by too many modern day manipulations.

The Name and the Label

Is it a kohlrabi? Is it a globe? Is it a beet? Here's the story:

The name Liquid Farm was thought of long before there was wine in barrel. Our goal was to create awareness about what happens above ground and below ground, and tell the story of how both are inextricably linked to wine. Wine is, after all, a product of the earth and the human touch. It is Liquid from Farming.

In 2009, the first four barrels filled with wine and the name Liquid Farm already in place, the label itself was still a huge blank. We had a fascination with dandelions; the way they develop from pod to flower to the white fluffy thing we all made wishes on as kids. You can also make wine out of dandelions in the spring (something we have been meaning to get around to) and loved the irony that dandelion leaves and roots have been used as a tonic for wine-drenched livers for centuries.

While poking around online for botanical or da Vinci-type sketches of dandelion roots we came across a black and white drawing - it appeared to be a beet root that had been mislabeled, but there was a haunting faint line running through the center that kept us coming back to it.

After a little research, we were able to track down the talented artist: Val Littlewood, a gifted nature illustrator from the UK. She was able to transform her fatefully misnamed beet root into our Liquid Farm image by coloring the bulb and adding in the flower (figuratively, the grape) that transports what is found below ground to "above ground."

When developing the image into an actual wine label, we wanted to remain dedicated to telling the Above Ground/Below Ground story. The vintage, placed above the line, pays homage to the particular year's influence on the wine, while the AVA of Sta. Rita Hills lies below, honoring the soil's unmistakable impact, which also ends up inside the glass.