Item was successfully added to your cart

With only 4 barrels to start in 2009, all from the same vineyard, the original idea was to make one wine. The wine itself had a different plan and we gladly listened.

Two of the four barrels made up White Hill. With a more mineral driven profile, those barrels reminded us of drinking 1er Cru Chablis and were given their name in honor of the chalky white hills of Chablis and diatomaceous earth of Sta. Rita Hills.

The other two barrels had a profile of warmer tones and were texturally more voluptuous, reminding us of Meursault and the other sexy wines from the Cote d' Or (Slope of Gold) we are admittingly addicted to. Hence, the first two bottlings were born: White Hill and Golden Slope. In 2011 we had the opportunity to make a little Bandol-inspired Rosé and since we drink white and Rosé like water all year-round, it seemed like a pretty good idea. 2013 harvest brought the opportunity to branch out with a small amount of Chardonnay from the neighboring, sister AVA of Santa Maria.

Our mantra is simple: quality over quantity. As a Chardonnay-focused project, hopelessly devoted to a teeny tiny AVA, our production is limited...

To help us best allocate our production as thoughtfully as we can nationwide, we currently sell our wines directly to members of our Wine Club. aka; the LF Family.

We would love for you to join us.

WARNING: Drinking distilled spirits, beer, coolers, wine and other alcoholic beverages may increase cancer risk, and, during pregnancy, can cause birth defects. For more information fo to www.P65Warnings.ca.gov/alcohol 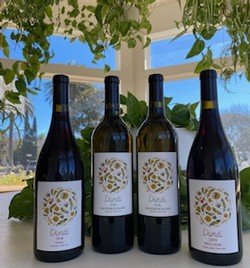 The 2018 vintage exhibits the minerality one expects from this wine, but is just a touch richer than the previous vintage. It quickly became a favorite amongst Team LF and some of us might even risk saying that this is the best White Hill to date!!

We knew that the 2015 Golden Slope was going to be a hard act to follow, but once again the Sta. Rita Hills reminded us why it is (in our opinion) one of the best places on the planet for Chardonnay. Notes of toasted marcona almonds, lemon sorbet, and river rocks leap out of the glass followed by subtle hints of burnt marshmallow, brioche, and vanilla. This vintage is a great example of why we have endearingly nicknamed this wine the "Goldilox" Chardonnay.

In 2011 we found FOUR barrels that just had something more ethereal to them...More musky, earthiness and this sort of perfect balance of power and finesse. Those FOUR barrels were held back from Golden Slope to be bottled on their own; creating our FOURth wine (the first two being White Hill and Golden Slope, the third being Rosé). We started out with FOUR barrels for our first vintage in 2009, and with one of our favorite numbers being FOUR, and another's childhood soccer number being FOUR - the wine sort of named herself. Its a sexy expression of Chardonnay that drinks incredibly near term over the course of a few days and that ages beautifully if you're able to resist opening. Extremely limited quantities of this wine are available.

Made entirely from old-vine Chardonnay from the legendary Bien Nacido vineyard. This continues to be our only single-vineyard Chardonnay offering. 20% new French oak, aged for 15 months. Rich and full bodied with notes of tropical fruits, marzipan, and French vanilla. Approximately 150 cases produced.

Another vintage sourced entirely from Sta. Rita Hills!! Cherry cola, sassafras, purple flowers, and clove are the prominent profiles on this elegant Pinot Noir. Radian, Spear, Sanford & Benedict, and La Rinconada vineyards. 12 months in barrel, 10% of which was new French oak. Just a hint of stem inclusion to give structure.

Radian Vineyard is the westernmost vineyard along Santa Rosa Rd, in the heart of Sta. Rita Hills. Cold nights and a constant marine influence makes this site ideal for expressive and balanced Pinot Noir.

Aged 15 months in French oak (15% new) with 15% stem inclusion. While she sure is showy now, expect great things as this wine matures over the next decade.

As soon as we heard that an all new, Certified Organic vineyard was being planted right in the heart of Sta. Rita Hills we couldn't wait to get our hands on some of the sure-to-be delicious fruit. We began working with Spear Vineyards in 2015 and are blown away each year, as the vineyard contiues to develop and mature. 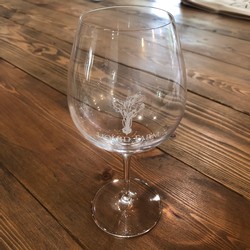